Emma Jaber’s journey from young immigrant to established American started in the early 1990s, when her family left southern Iraq and resettled in California. As a daughter in a traditional household, she had only as much autonomy as her father and other male family members allowed—but her marriage at age 14 provided a doorway to a different future. Although the marriage eventually ended in divorce, she credits her first husband with helping her blossom into adulthood.

Today Emma, her second husband and their two young children are a typical busy Metro East family—with a nine-year-old eatery in the Central West End and a whirlwind of activities that includes volunteering with Welcome Neighbor. “I have my heart set on helping new Americans,” Emma says. In particular, she’s passionate about helping women from the Middle East access education and a career.

The nonprofit has also given Emma herself an outlet to experiment with cooking vegetarian and vegan versions of Middle Eastern dishes, a nod to her own dietary choices. At her family’s business, Taste of Lebanon, it wouldn’t be possible to switch completely away from animal products, and it’s relatively rare within Arab culture for people to choose a vegetarian diet. But Emma’s ability to look ahead and circumvent the current limitations has always been strong. She’s also adept at critical thinking and reflection.

As a woman and as a parent, she’s been deliberate about which traditions and customs to keep and which to transform. She describes her husband’s Lebansese culture as “more humanitarian,” she says their household is a mix of those two cultures within an American context. Nonetheless, she says, “I’m a proud Iraqi. When we go places, I always tell people I’m from Iraq.”

Emma hopes to grow her vegetarian and vegan catering business, providing recent immigrants with financial opportunities along the way. She’s seen the benefits of cooperation rather than competition—especially in the kitchen, where there can be a mentality that “my hummus is better than your hummus,” as she puts it—and she intends to share what she’s learned.

Emma is hosting a Vegan Lebanese Supper Club at St. John’s Episcopal Church on November 22, 2019 from 6-8pm. Learn more by clicking the button below.

To sign up to volunteer with Welcome Neighbor STL, please complete our online request form or contact Jessica Bueler via email at [email protected] 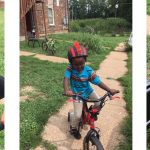 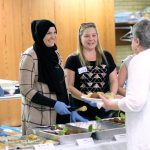