Ayman Almlla and his wife, Ghaidaa Masrabi, wake up at 6:30 a.m. every Sunday morning to begin food preparation. On this particular Sunday, the menu includes chicken, chickpeas, rice with vegetables, and manakeesh. By the time I arrive at 9:00 a.m., they are putting the final touches on the meal, and I am greeted by their son, Bassam, 8, who bounces down the stairs to open the front door.

In the kitchen, Almlla lays out the Styrofoam containers, while Masrabi stirs vegetables that are still cooking on the stove. It’s a familiar routine; they move effortlessly around each other and somehow still manage to extend their hospitality to me. Almlla hands me a manakeesh as he begins to fill the containers, and Masrabi brings me a Syrian coffee between her stirs. Even Bassam and his older sister, Wafaa, 9, help out by placing a manakeesh in each container. Almlla, Masrabi, and their three children, Tarek, Wafaa, and Bassam, arrived in St. Louis in September of 2016 after fleeing their home in Syria in September 2012. They spent four years living in Alexandria, Egypt, while they waited for their relocation

“For us, it is better here,” says Almlla referring to the family’s time in Alexandria.

“But I am sad for my family,” adds Masrabi whose family is still in Egypt, while Almlla’s parents and brother (who is married to Masrabi’s sister) are in Turkey.

“We lost everything,” says Almlla who had three stores with his brother in Syria. Perhaps it’s this common thread of knowing what it’s like to lose everything that motivates the family to donate their Sunday mornings cooking for the homeless community.

Though Almlla says they volunteer because it’s their way to pay back the help they received when they first arrived in St. Louis. “When we came here, everybody helped us,” he says.

As a way to give back, they have agreed to cook every Sunday in July, and Ghaidaa has offered to cook in August if no one else has agreed to do it.

The Sunday meal delivery began in December 2018 as a partnership between Welcome Neighbor STL, St. Louis Teens Aid Refugees Today (START), and Street Kitchen. The three organizations work together seamlessly, each understanding their role and that their outreach is more effective when they work together.

Welcome Neighbor STL organizes the volunteer cooks, while START raises the funds for the meals,  drops off the containers mid-week to the family who is cooking, and collects the meals Sunday morning. Once downtown, Street Kitchen, an organization that works to support the needs of the homeless community, organizes the distribution.

On this particular Sunday, Almlla and Masrabi and their two youngest children come to help distribute food. Masrabi stands off to the side and smiles demurely, nodding her head when she is thanked for her food. “Bless you,” a man says as he walks past her.

Bassam helps to hand out food. As soon as he sees a man approaching, he grabs a container and holds it up to him. “Would you like some food?” he asks. The man takes it and smiles at the young boy. “Thank you,” he mutters.

“It makes you feel more connected to the city,” says Luke Braby, a co-founder of START.

Braby and Adam Saleh, both incoming seniors at Priory, decided to create an organization to help refugees after Saleh met a refugee at his mosque. The man was selling food to earn money for his family. “He was living in a really small apartment with 7 people. He didn’t have much money, and he didn’t speak English very well,” says Saleh. “That was the first family I helped.” Braby and Saleh didn’t know the refugee community when they started their organization. They just knew they wanted to help. But through their partnership with Welcome Neighbor STL, they have developed lasting relationships. “It becomes like you’re helping family friends. You become emotionally invested,” says Saleh.  “I can’t stop now because I would be letting down friends.”

Jen Roberts is a St. Louis-based writer who writes on a variety of topics including immigrants and refugees, local and global social issues, travel, and arts and culture. When she is not writing, you can find her relaxing at a cafe, logging miles in Forest Park, or planning her next trip. You can find her work at jen-roberts.com or follow her travels on Instagram at @jen_roberts22. 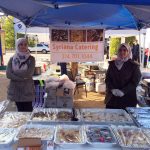 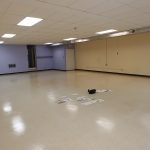