As summer in St. Louis sends the heat index higher, one person you won’t hear complaining is Arwa Sukarya. The native of Damascus, Syria, came to the United States in September of 2016, landing in Louisiana. While she was happy to be in the States after three and a half years of living in Jordan due to the war in Syria, she wasn’t a fan of the heat and humidity along the Gulf Coast. When the opportunity came to move further north, to St. Louis, Arwa and her family embraced it.

Now Arwa, her husband and their children—two daughters and one son—are settling in to the Midwest. One thing Arwa loves is the weather. “Fall is so beautiful here, and so is spring” she says. It’s also good to be near her husband’s family, and she’s grateful her children can grow up with their cousins. But most of all, she values the people she’s connected with. She says she’s heard that “some people think speaking Arabic is bad, or women in a hijab are bad, but thank God I haven’t met them. The Americans I’ve met have all been so nice.” One of those nice Americans she happened to meet through a friend was Jessica Bueler. With support from Jessica and Welcome Neighbor, Arwa has fulfilled a longtime goal of starting to develop her own culinary business. Like many successful cooks, she grew up watching her mom cook, but she wasn’t allowed to help much—so instead she soaked it all in through her senses. That changed when she got married and had a kitchen of her own, and she hasn’t looked back since.

Arwa has participated in Welcome Neighbor’s Supper Club events and has even hosted a group cooking class—a challenge that gave her confidence in both her cooking and in her English abilities. Her favorite dishes to prepare? Freekeh, or green durum wheat that’s been roasted and cracked. “I like freekeh so much,” Arwa says with a laugh. Another favorite is meat that’s cooked bone-in for three or four hours and served with rice and curry.

While she hopes the situation in Syria improves for the sake of her family—her parents and sister still live in Damascus, and her brother is in Turkey—Arwa’s own plans for the future center on St. Louis. “I want to work as an interpreter when I speak better,” she says. “I want to buy a big house and get a better job for my husband. And I hope my children get a good education and have a good future.”

To learn more about scheduling a cooking class or supper club event with Arwa Sukarya, please complete our online request form or contact Jessica Bueler via email at [email protected] 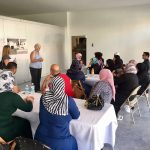 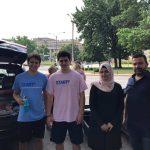