Ten years have passed since the civil war in Syria started and hundreds of thousands of families have left their homes to seek refuge in other countries. Reeaan, Mohammed, and their children are one of these families. They lived in the countryside, near Daraa, in south Syria, close to the border with Jordan. Reeaan lived with seventeen people on a farm owned by her family. She has nine sisters and three brothers and worked the farm with all of them. Her siblings still live in Syria, constantly moving cities to seek safety.

A man stands atop a building looking at the destroyed Syrian town of Kobane, also known as Ain al-Arab, 2015. Bulent Kilic/AFP/Getty Images

“We lost many things in this war.”

As Reeaan said, “We lost many things in this war.” In 2011, she, Mohammed, and their five children walked across the southern border and arrived in Jordan. After living in a refugee camp for two months, they moved to a city where Mohammed found work and support from a local family with whom they still keep in contact. Life in Jordan was difficult, especially with children. Any schools were far from where they lived and, unlike here, there was no bus service to transport the kids to and from school, so instead they stayed home. After three years living there, they got the news from the United Nations Refugee Agency that they could come to the United States.

They feel safe and happy that the kids have access to quality education.

When the family arrived in St. Louis, they were placed in the Hodiamont apartment complex where they did not feel safe. One day, after sending her children to school, Reeaan heard gunshots and ran to the streets desperate for the safety of the kids. After living in that apartment for 8 months they began to wonder why they were brought here. Despite the difficulties, Reeaan was glad for the community she was able to build with other Syrian families that also lived in the complex. After several months had passed since moving to St. Louis, Reeaan met Janice Seele through a Syrian friend. That encounter would forever change their lives. Janice had been following the news and read about the vulnerable situation of some refugee families in St. Louis. She heard the story of a friend in the STL Symphony who bought a house to rent to a refugee family and decided with her husband, Steve, that they would do the same. It has been four years now since Reeaan, Mohammed, and their six children moved to Richmond Heights and they are extremely thankful for Janice’s kindness. They feel safe and happy that the kids have access to quality education to help them build a brighter future.

Janice says it was a blessing to find out about Welcome Neighbor STL and connect with the right people to help with Reeaan’s family needs. Janice opened her house for Reeaan’s girls to have online school when in-person classes stopped and continues to host a girls’ book club. All of their five kids that are in school are great students and their little four-year-old stays home with Reeaan. The biggest challenge for Janice of being a refugee family partner is dealing with the paperwork involved in the refugee resettlement. On the other hand, the greatest joy is getting to know them, spending time together, and feeling the loving and delightful character of the family. Janice says “they’re just like family.” Unfortunately, because of COVID, she had to limit her visits to them, but she is looking forward to her vaccine and being able to see them more often again. She misses sitting around the table, playing board games with the kids, laughing, and having face-to-face interactions.

Reeaan cannot find words to express her love and gratitude for Janice. She says Janice is her family here and another mom for her children. It is a big responsibility to take care of six kids, learn English, and study for the citizenship test she hopes to take soon. Janice helps with the children’s education while Reeaan takes care of the little boy and Mohammed works at a restaurant. The family would like to go back to Syria to visit their relatives, but Reeaan says she can’t imagine her life without Janice anymore. Reeaan shares that not even family members would do as much as Janice has done for them. She feels truly thankful for the life her family has in the US and she is happy that she can financially help her relatives that still live in Syria. Life there is expensive. Her family doesn’t have gas or electricity and many times they don’t have food to eat. Any extra money that Reeaan and Mohammed make is sent to their siblings overseas. Reeaan’s goal is to see her children grow and do something good in life. She wants them to study, go to college, and build a happy family. She would also like to open a food business with her husband, where they would work together to provide for their family. Reeaan feels homesick, but she feels encouraged to study for the citizenship test because once she legally becomes an American, she can freely visit her family.

The story of Reeaan, Mohammed, their six children, and the family partner Janice Seele is just one of the hundreds of refugee families in the St. Louis area. Reeaan says she feels lucky to meet people at Welcome Neighbor STL. It is a community of refugee families, family partners, and volunteers working together, mutually invested with one common goal to improve the St. Louis community.

To learn more about Welcome Neighbor STL and our Supper Club program, please visit our homepage and sign up for our newsletter by simply clicking our logo at the top of this page. We also have a very active Facebook page at https://www.facebook.com/groups/WelcomeNeighborSTL. 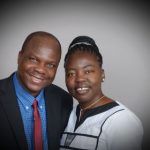 For Béatrice Bouda, Sharing Meals With Others Reminds Her of Home in Burkina FasoBlog 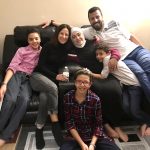 The Journey to Barber (Again) and LawyerBlog
X
X